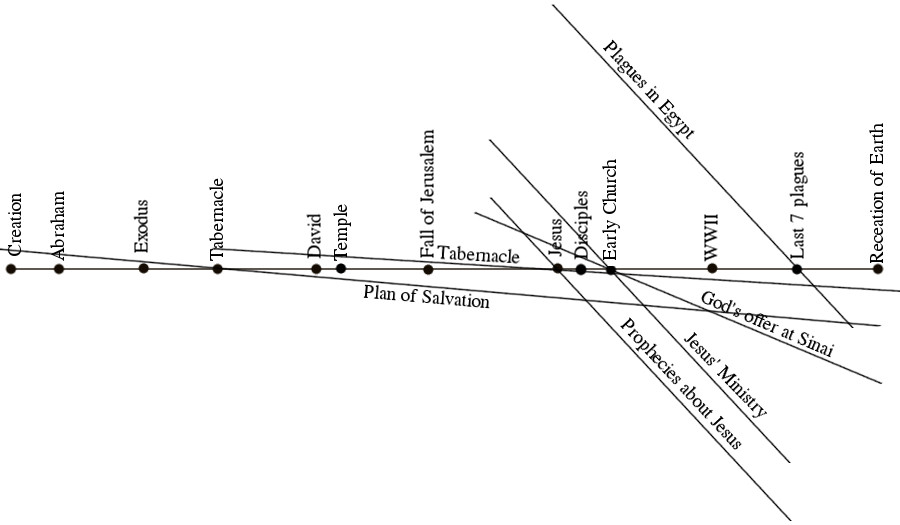 God’s timeline may seem like one of the most difficult concepts to comprehend, but God’s timeline is not much different than any timeline we use here on earth. We often see people post warnings on the Internet. Some event happens and people get excited. Hundreds of people jump on line trying to be the first to comment on major events, sort them out, and explain them. Some people may actually do a little research before commenting. In some cases the author will point out past events in history that may or may not have a relationship to the current situation. What those people are doing is showing a parallel in history. That is where God’s timeline differs from earthy timelines. People here try to establish parallels in history and line them up with current events. God does things a little differently.

God can take events in history, past, present, or future to use as illustrations, warnings, or promises. People will sometimes try to use the Bible to establish some type of parallel to a current event. But God uses intersecting events.

When we look at a straight timeline we use dates to turn a linear timeline into a measuring device. People often add parallel layers to a mock up of their timeline to illustrate a point. They may use color charts. Some people use curves or circles to create their impression of a timeline. If we were to use the widely accepted concept of a linear timeline and use that to explain God’s timeline, we would see a series of lines at different angles intersecting points or dates on that linear timeline.

The timeline shown is only an example for illustration purposes. It does not depict accurate timing nor a complete collection of events.

As we progress down the timeline, Jesus’ ministry would intersect the disciples as well as the early church, and progress through the timeline up to His’ return.

Setting up a timeline to understand God’s timing is a careful blend of personal preference and inspired direction. The majority of inspired direction comes from the pages of the Bible. The Bible actually contains a series of directions, clues to locate intersecting stories in the Bible. Take for example Jesus’ ministry. Look at the Old Testament scripture Jesus quoted. Those stories intersect that particular point in Jesus’ ministry. It could be the miracle He performed that day or an answer to a question.

The example above is a rather rough draft of a illustration showing God’s timeline. That timeline covers way too much time to show a proper example. You could draft your own timeline based on what you are studying. A series of stories out of one of the Gospels will show a shorter, more detailed timeline with intersecting stories taken from the Gospels and found in the Old Testament.

Once you learn to understand how stories in the Bible add details and explain lessons on a spiritual level, portions of the Bible will open up like never before. You will learn things you never expected. Things no one has ever told you or preached about. Things you never read in a book or saw on a video. Once you learn how God puts together His timeline, you will know what it feels like to study at the feet of Jesus.

Obviously We Can See God Where would the first place you would look for God? Obviously in His Word. If God exists and if God was all knowing, seeing the beginning from the end, and has enough love for His people He wants to warn them of what coming, we would expect to see clear…
END_OF_DOCUMENT_TOKEN_TO_BE_REPLACED

How to Progress in a Bible Study After you find a place to begin a study, how do you progress? Where do you go from there? That has to be a question to ask and pray about. Lucky for us, the Bible is arranged in such a way that the Bible itself leads you from…
END_OF_DOCUMENT_TOKEN_TO_BE_REPLACED

God’s Timeline God’s timing is best explained using what we view as a linear, or strait, one dimensional timeline. Of course God has a different view of time. He knows nothing but eternity and has the power to see future events, as well as having a perfect memory of the past. Since we do not…

Divisions Are Drawn It doesn’t matter if you are left or right, conservative or liberal, religious or an atheist, deep down inside we all have the same feeling. Either we know or we have a suspicion, covid-19 is a man made virus and we are at the mercy behind the formulation, release, and maintenance of…
END_OF_DOCUMENT_TOKEN_TO_BE_REPLACED

We Are Seeing Genesis Unfold Today People tend to skip over Genesis, missing the details that explain what we see happening today. The Bible has a tendency of revealing details we went over a hundred times. Then one day we read those same stories and the details jump off the page explaining everything we happen…
END_OF_DOCUMENT_TOKEN_TO_BE_REPLACED

The Bottomless Pit When we compare the events recorded in Revelation we can’t help but notice how relevant announcements are. So far angels, thunder, lightening, earthquakes, trumpets, and other things have been used to announce events. We see this repeated throughout Revelation. In some chapters the symbol is introduced and defined. In other cases the…
END_OF_DOCUMENT_TOKEN_TO_BE_REPLACED

Welcome to Satan’s Playground If you’ve ever wondered what hell looks like, take a look at 2021. We have vaccines forced upon us. In 2020 the government talked about spending a few billion dollars. In 2021 the government spent $11 trillion in the first six months and ran out of money. If the government accomplished…
END_OF_DOCUMENT_TOKEN_TO_BE_REPLACED