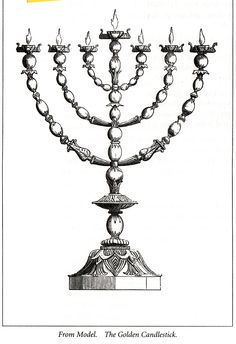 This is a short study on the lampstand in the Tabernacle. The original design. Comparing the description Moses recorded of the lampstand with other stories in the Bible about lamps casts a whole new light on the subject. This is one view you will find no where else. 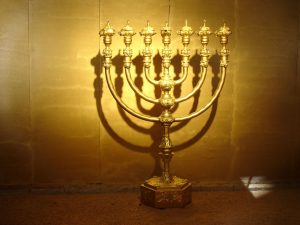 Exodus 25:31-40 NLTse “Make a lampstand of pure, hammered gold. Make the entire lampstand and its decorations of one piece–the base, center stem, lamp cups, buds, and petals. (32) Make it with six branches going out from the center stem, three on each side. (33) Each of the six branches will have three lamp cups shaped like almond blossoms, complete with buds and petals. (34) Craft the center stem of the lampstand with four lamp cups shaped like almond blossoms, complete with buds and petals. (35) There will also be an almond bud beneath each pair of branches where the six branches extend from the center stem. (36) The almond buds and branches must all be of one piece with the center stem, and they must be hammered from pure gold. (37) Then make the seven lamps for the lampstand, and set them so they reflect their light forward. (38) The lamp snuffers and trays must also be made of pure gold. (39) You will need seventy-five pounds of pure gold for the lampstand and its accessories. (40) “Be sure that you make everything according to the pattern I have shown you here on the mountain.

Here is a lesson in digging deep, far deeper into God’s word than anyone has gone before. Look at this text. See anything unusual? Matthew 25:4 But the wise took oil in their vessels with their lamps.

Why did only the wise have vessels and lamps? Everyone is usually wrapped up in the simple, easy to understand interpretation of the oil, they don’t bother to study the differences between the foolish and wise.

So what does the vessel spiritually represent? If you think you can answer that question at this point, forget it, you already disqualified yourself from learning a spiritual lesson. You see, you can only learn a spiritual lesson when you admit you do not have the answer. This opens the mind and the heart to the Holy Spirit. The first step is to pray.

This study requires a bit of inductive thinking. We have to find something similar, related, or the same as a vessel and a lamp in the Bible. What is the Spirit telling you? The most likely answer would be the candle stick in the Tabernacle.

A basic oil lamp consists of a container for the oil, a section to hold a wick, and the wick. The candlestick contains seven lamps, each branch must contain each of the parts. Since Exodus 25:31-40 contains the detail which describes the body to hold oil. “A knop and a flower in one branch; and three bowls made like almonds in the other branch, with a knop and a flower: so in the six branches that come out of the candlestick.” The bowl is the body of the candlestick made to hold oil.

See how easy that was? Now you learned something, the portion of the candlestick holding oil is called the bowl. But wait, where is the spiritual lesson? Has this taught us anything we didn’t know before?

What are the bowls shaped like? Almonds, which are going to tell us exactly what the vessels represent. What story does almonds remind you of? “Moses went into the tabernacle of witness; and, behold, the rod of Aaron for the house of Levi was budded, and brought forth buds, and bloomed blossoms, and yielded almonds.” Numbers 17:8.

There you have it, almonds represent God’s miracles. This is why God used almonds to hold oil for the candlestick. Using inductive thinking, we can see the almond shaped bowls, or vessels on the candlestick represent God’s miracles. Only the wise virgins had both lamps and vessels. Only the wise, or true followers of Jesus will have both God’s word, and the gift of miracles. Jesus gave His disciples the gift to perform miracles when He sent them out. First the twelve, then the seventy.

Matthew 10:1 And when he had called unto him his twelve disciples, he gave them power against unclean spirits, to cast them out, and to heal all manner of sickness and all manner of disease.

Matthew 10:7-8 And as ye go, preach, saying, The kingdom of heaven is at hand. (8) Heal the sick, cleanse the lepers, raise the dead, cast out devils: freely ye have received, freely give.

Luke 10:1 After these things the Lord appointed other seventy also, and sent them two and two before his face into every city and place, whither he himself would come.

Luke 10:8-9 And into whatsoever city ye enter, and they receive you, eat such things as are set before you: (9) And heal the sick that are therein, and say unto them, The kingdom of God is come nigh unto you.

Luke 10:17 And the seventy returned again with joy, saying, Lord, even the devils are subject unto us through thy name.

The gift of healing continued after the resurrection. Proof is recorded in the book of Acts.

Acts 3:6-7 Then Peter said, Silver and gold have I none; but such as I have give I thee: In the name of Jesus Christ of Nazareth rise up and walk. (7) And he took him by the right hand, and lifted him up: and immediately his feet and ankle bones received strength.

Acts 5:14-16 And believers were the more added to the Lord, multitudes both of men and women.) (15) Insomuch that they brought forth the sick into the streets, and laid them on beds and couches, that at the least the shadow of Peter passing by might overshadow some of them. (16) There came also a multitude out of the cities round about unto Jerusalem, bringing sick folks, and them which were vexed with unclean spirits: and they were healed every one.

This is the end of chapter 25. When we look at the next chapter, Moses began describing the curtains. Those three items, the Ark, table, and lampstand are the only items in that compartment known as the Most Holy. The design is simple and so is the message,.

The lampstand is basic. It is made of pure gold cast in one piece. We have no idea how large the lampstand is, but we do know it had seven branches. One in the middle with three on each side. The last item described in the Most Holy place shows balance. Each branch is made the same.

The lampstand had a pattern of cups shaped like almond blossoms, complete with buds and petals. God used flowers to give His compartment or apartment a little decorating flare. Those also point us back to creation and remind us, God is the Creator.

The God of the universe has three simple items in the room He said He will live. God wasn’t out to impress people. The gold covered Ark and table may appear far more valuable to people than they really are. They’re not pure gold, only covered in gold. Their simple design tells us how people will always be trying to put more value on them then they really have. True the Ark does have a solid gold cover, but it is what’s inside that really counts. Those angels on top are solid gold because they are supposed to remind us there is an entire universe out there keeping that set of laws they cover.

People like to envision a huge lampstand of solid gold. It may be made of pure gold, but how solid is it? It has to be hollow to carry the oil. Most of the lampstand is made up of oil much like the Ark and table are made of wood.

The lampstand is useless without the oil that is burned to provide light. Again, like the Ark, it’s what’s inside that counts. The law and oil have one thing in common. Neither is of any use unless they are brought to the outside and shown to the world.

How about you? Is the house you live in that simple? Let me guess. The room you’re in has a couch, chair, table, lamp, big screen TV, surround sound, DVD player, stereo amplifier, and six speakers complete with a sub woofer. Did we learn anything from the Tabernacle, or did we learn it all from the temple?

Moses was told to make everything was made according to the pattern shown on the mountain. God wanted His room simple to convey a message. That room pointed to the simple life Jesus led in Heaven and earth.

But people want to take all those items out of God’s room and use them all over the place. The lampstand is the perfect example. Solomon gave us a simple explanation to consider. For their command is a lamp and their instruction a light; their corrective discipline is the way to life. (Proverbs 6:23 NLTse). Solomon showed the simple connection between the light and God’s law. It’s difficult to miss because there are only a few items in that room. There isn’t a lot of reading material. Moses put the set of regulations and a copy of the law in the side of the Ark.

A lot of people like to use another verse to explain what the light from the lampstand represented. To the law and to the testimony: if they speak not according to this word, it is because there is no light in them. (Isaiah 8:20 KJV). They like using this verse because it’s easier to take out of context and use it any way they please. Most often people use this verse to prove the authority of their doctrines. They also use Isaiah to prove their authority over future prophecy. The problem is, that lampstand is inside a tiny room known as the Most Holy where God met with Moses and Aaron. Two men out of more than a million people. The pattern Moses was given didn’t included any man made doctrine and certainly didn’t mention a word about any future prophecies.

Moses made it clear every item in that room was a pattern of what he was shown in Heaven. But people pull that lampstand out of God’s dwelling place, and use it to look for prophecies about this world. There are no items or symbols supporting that interpretation, but people use it all the time. And they repeated it so many times, the world believes them, leaving God in the dark.

But God is smarter then them. If they bothered to read the next few sentences, they would find out what happens when they try to misuse God’s light. And they shall pass through it, hardly bestead and hungry: and it shall come to pass, that when they shall be hungry, they shall fret themselves, and curse their king and their God, and look upward. And they shall look unto the earth; and behold trouble and darkness, dimness of anguish; and they shall be driven to darkness. (Isaiah 8:21-22 KJV).

Moses told us the lampstand is made out of seventy-five pounds of pure gold. In today’s market price of $1200 per ounce, that lampstand would be worth $1,440,000. A small fortune but not a great deal of money compared to today’s standard. It would be just enough to be comfortable. You could retire on that sum if you wanted to live a simple life.