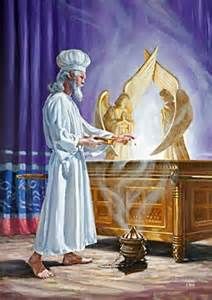 Leviticus 16:15-17 KJV Then shall he kill the goat of the sin offering, that is for the people, and bring his blood within the vail, and do with that blood as he did with the blood of the bullock, and sprinkle it upon the mercy seat, and before the mercy seat: (16) And he shall make an atonement for the holy place, because of the uncleanness of the children of Israel, and because of their transgressions in all their sins: and so shall he do for the tabernacle of the congregation, that remaineth among them in the midst of their uncleanness. (17) And there shall be no man in the tabernacle of the congregation when he goeth in to make an atonement in the holy place, until he come out, and have made an atonement for himself, and for his household, and for all the congregation of Israel.

Leviticus 16:34 KJV And this shall be an everlasting statute unto you, to make an atonement for the children of Israel for all their sins once a year. And he did as the LORD commanded Moses. 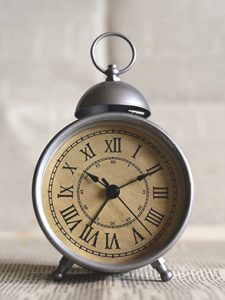 This should be one of the most familiar prophecies Jesus fulfilled. The majority of Hebrews explains how Jesus fulfilled this and a number of other prophecies once He entered the Heavenly Sanctuary. The disciples were given the prophecies Jesus fulfilled to preach to the world. The beginning of their ministry was filled with the revelation of one after another prophecy which came to light as they studied scripture and remembered all the experiences they went through with Jesus. As the prophecies unfolded in God’s time, the disciples were able to build faith for all new believers as they were guided by the Spirit to the same prophecies. Many people who went to hear Jesus teach and followed Him began experiencing a new understanding of the scriptures. The number of disciples grew as they shared scripture and their eyewitness accounts of how it was fulfilled by Jesus. When the time was right, God sent another witness to explain one of the most important prophecies about Jesus and His ministry within the Heavenly Sanctuary. Piece by piece the plan of salvation was coming to view with such a force it forged a unity within the new church that would reshape the world’s view of the Messiah. The book of Hebrews explains how the symbols used in the Tabernacle pointed to Jesus’ ministry in the Heavenly sanctuary.

Hebrews 9:7 NLTse But only the high priest ever entered the Most Holy Place, and only once a year. And he always offered blood for his own sins and for the sins the people had committed in ignorance.

Hebrews 9:8-10 NLTse By these regulations the Holy Spirit revealed that the entrance to the Most Holy Place was not freely open as long as the Tabernacle and the system it represented were still in use. (9) This is an illustration pointing to the present time. For the gifts and sacrifices that the priests offer are not able to cleanse the consciences of the people who bring them. (10) For that old system deals only with food and drink and various cleansing ceremonies–physical regulations that were in effect only until a better system could be established.

Hebrews 9:11-12 NLTse So Christ has now become the High Priest over all the good things that have come. He has entered that greater, more perfect Tabernacle in heaven, which was not made by human hands and is not part of this created world. (12) With his own blood –not the blood of goats and calves–he entered the Most Holy Place once for all time and secured our redemption forever.

Aaron entered the Most Holy only once a year. This is where the ark resided in God’s presence. It was a responsibility only he as high priest could perform. God appointed Aaron high priest to minister in the Tabernacle according to the services handed down through Moses. God also gave Moses the pattern for the clothing Aaron was to wear.

As Aaron stood in silence preparing his mind for the ceremony ahead, his sons moved in an ordered process preparing the chest piece, ephod, robe, patterned tunic, turban, and sash, for their father, the high priest.

First to go on was the ephod made of finely woven linen and skillfully embroidered with gold, blue, purple, and scarlet thread. The ephod’s collar was stitched in layers to ensure it would never tear. Aaron felt its weight rest against his chest as his sons lowered it over his head. The matching sash was tied around his waist as Aaron stared in space, thinking about the work a number of people put into the garments. What went through their minds as they stitched each pattern knowing they would be worn in God’s presence?

Aaron studied the detail of the breastplate as his son carried it to his father and placed it over his chest. Aaron went over the twelve names written on the twelve jewels and engraved on the two onyx stones he wore over his heart. He know they represented not only Jacob’s twelve sons, but all Israel. Aaron thought of the questions he and Moses brought to God, waiting for Him to answer though the Urim and Thummim. 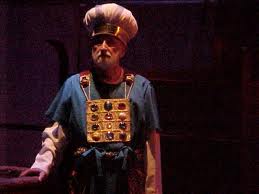 Aaron’s sons moved in military like precision as they fastened the breastplate with blue and gold threads through the series of gold rings. Once the breast plate was fastened, Aaron heard the bells of the robe as his sons approached from behind. Aaron put his arms back as his sons drew the robe upon his shoulders, then placed the turban with matching blue, red, and purple embroidery upon his head. Finally the medallion was fastened to the front of Aaron’s turban with a blue cord. Aaron was now ready to minister before God.

When we study the Old Testament we see how Aaron dressed and served God in the earthly Tabernacle. God’s original plan was to make Israel a kingdom of priests. When they turned down God’s offer, He choose the tribe of Levi for the role of priests, appointing Aaron high priest. Jesus gave us a second chance to reclaim the offer when He opened the way to the throne of God to each and every one of us.

It seems no one had more trouble understanding Jesus’ mission on earth than Peter. What separated Peter from the other disciples was his questions. Like the others, Peter did not understand God’s plan of salvation until after Jesus’ death, resurrection, and ascension to Heaven. On Pentecost Peter stood up boldly to preach Jesus and the prophecies He fulfilled during His ministry on earth. Peter could see the promises Jesus fulfilled, forgiving our sins, over coming death, opening the path to a complete and personal relationship with God, and one more. The promise of a royal priesthood, a holy nation, God’s very own possession. As a result, you can show others the goodness of God, for he called you out of the darkness into his wonderful light. (1 Peter 2:9 NLTse).

What is a fulfillment of the role of priest in God’s Kingdom? How many people are studying Jesus’ role as High Priest? Many call Jesus a model, our model. How many people study Jesus’ model as High Priest? How far are we willing to go to fulfill the role of priest in God’s Kingdom? Or is this generation finding a new excuse to turn down God’s invitation again?

Obviously We Can See God Where would the first place you would look for God? Obviously in His Word. If God exists and if God was all knowing, seeing the beginning from the end, and has enough love for His people He wants to warn them of what coming, we would expect to see clear…
END_OF_DOCUMENT_TOKEN_TO_BE_REPLACED

How to Progress in a Bible Study After you find a place to begin a study, how do you progress? Where do you go from there? That has to be a question to ask and pray about. Lucky for us, the Bible is arranged in such a way that the Bible itself leads you from…
END_OF_DOCUMENT_TOKEN_TO_BE_REPLACED

God’s Timeline God’s timing is best explained using what we view as a linear, or strait, one dimensional timeline. Of course God has a different view of time. He knows nothing but eternity and has the power to see future events, as well as having a perfect memory of the past. Since we do not…
END_OF_DOCUMENT_TOKEN_TO_BE_REPLACED

Divisions Are Drawn It doesn’t matter if you are left or right, conservative or liberal, religious or an atheist, deep down inside we all have the same feeling. Either we know or we have a suspicion, covid-19 is a man made virus and we are at the mercy behind the formulation, release, and maintenance of…
END_OF_DOCUMENT_TOKEN_TO_BE_REPLACED

We Are Seeing Genesis Unfold Today People tend to skip over Genesis, missing the details that explain what we see happening today. The Bible has a tendency of revealing details we went over a hundred times. Then one day we read those same stories and the details jump off the page explaining everything we happen…
END_OF_DOCUMENT_TOKEN_TO_BE_REPLACED

The Bottomless Pit When we compare the events recorded in Revelation we can’t help but notice how relevant announcements are. So far angels, thunder, lightening, earthquakes, trumpets, and other things have been used to announce events. We see this repeated throughout Revelation. In some chapters the symbol is introduced and defined. In other cases the…
END_OF_DOCUMENT_TOKEN_TO_BE_REPLACED

Welcome to Satan’s Playground If you’ve ever wondered what hell looks like, take a look at 2021. We have vaccines forced upon us. In 2020 the government talked about spending a few billion dollars. In 2021 the government spent $11 trillion in the first six months and ran out of money. If the government accomplished…
END_OF_DOCUMENT_TOKEN_TO_BE_REPLACED