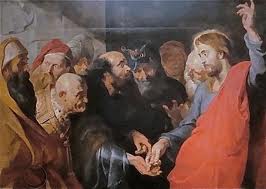 Mark 2:18-22 NLTse Once when John’s disciples and the Pharisees were fasting, some people came to Jesus and asked, “Why don’t your disciples fast like John’s disciples and the Pharisees do?” Jesus replied, “Do wedding guests fast while celebrating with the groom? Of course not. They can’t fast while the groom is with them. But someday the groom will be taken away from them, and then they will fast. “Besides, who would patch old clothing with new cloth? For the new patch would shrink and rip away from the old cloth, leaving an even bigger tear than before. “And no one puts new wine into old wineskins. For the wine would burst the wineskins, and the wine and the skins would both be lost. New wine calls for new wineskins.”

Jesus’ disciples do NOT fast

wedding guests do NOT fast

They can’t fast while the groom is with them.

When the groom will be taken away, they will fast.

old wineskins will burst (or tear)

Who would use new cloth as a patch?

the new patch would shrink and rip away from the old

no one puts new wine into old wineskins

This is what I love about Mark’s style of writing. We can compare so much on a few pages. When we look at the repeated words we ask, what does fasting, old, and new have in common? We travel the wrong path and will always draw the wrong conclusion when we try to answer with our own wisdom. We have to rely totally on God’s wisdom to provide the answer. It is a simple process of looking back over the previous texts.

Jesus begins His ministry by being baptized. He receives the blessing of His Father and the Holy Spirit. Jesus begins a forty day fast as He goes into the wilderness alone. While He was alone, He was tempted by Satan. One temptation stands out. Next the devil took him to the peak of a very high mountain and showed him the kingdoms of the world and all their glory. “I will give it all to you,” he said, “if you will kneel down and worship me.” (Matthew 4:8-9 NLTse). Satan showed Jesus some type of panoramic view of all the riches, kingdoms, and glory of the world which he offered Jesus. Of course Jesus turned it down. Satan left and angels came to tend to Jesus.

Next we see Jesus walking alone along the sea shore where He calls Simon, Andrew, James and John. Jesus is no longer alone. They go into a synagogue where a demon possessed man confronts Jesus. “Why are you interfering with us, Jesus of Nazareth? Have you come to destroy us? I know who you are–the Holy One sent from God!” (Mark 1:24 NLTse).

After leaving the synagogue, they go a Simon and Andrew’s home where Jesus heals Simon’s mother-in-law. She gets up to feed them. After dinner the whole town shows up to listen to Jesus and brings their sick to be healed.

We can see a pattern developing. Jesus is alone when He fasts, and is tempted by the devil, who offers Him the world. Jesus gains companionship, but again is comforted by an evil spirit inside a synagogue. Jesus leaves the synagogue, goes to Simon’s house where they eat and are joined by many more people.

A little while later we see Jesus at a house so packed with people they lower a paralyzed man down through the roof. After Jesus healed a leper, the religious leaders began following Him. They challenged Jesus. Some of the teachers of religious law who were sitting there thought to themselves, “What is he saying? This is blasphemy! Only God can forgive sins!” (Mark 2:6-7 NLTse).

Next Jesus invited Levi to follow Him. While dining with Levi and his guests, the teachers of religious law who were Pharisees saw him eating with tax collectors and other sinners, they asked his disciples, “Why does he eat with such scum?” (Mark 2:16 NLTse).

How does all this fit into the old and new? Who would be the old, and who would be the new? When Jesus was in the synagogue amazement gripped the audience, and they began to discuss what had happened. “What sort of new teaching is this?” they asked excitedly. “It has such authority! Even evil spirits obey his orders!” (Mark 1:27 NLTse). To them, Jesus and everything He taught was new. Did this mean everything they heard from the religious leaders was old? Let’s look at this idea and see if it consistently applies.

Jesus gathering common people as disciples is new. They find themselves confronted by a demon possessed man in a synagogue, which is the old. Jesus preaches and heals in a home, introducing the new. This is mentioned three times in Mark’s early chapters. Twice Jesus is confronted by religious leaders, the old. Look at what the religious leaders were trying to do and see how it applies to Jesus’ parables.

Mark 2:6-7 NLTse But some of the teachers of religious law who were sitting there thought to themselves, (7) “What is he saying? This is blasphemy! Only God can forgive sins!”

Their first comment was an attempt to separate Jesus from His Father. The same temptation Satan saved as his last attempt in the wilderness.

Mark 2:16 NLTse But when the teachers of religious law who were Pharisees saw him eating with tax collectors and other sinners, they asked his disciples, “Why does he eat with such scum?”

When we see the Pharisees showing how they separated themselves from the people, it is not difficult to understand why Jesus used the words tear and burst in His parables. He wanted the Pharisees to understand the problem with the old religious views they taught.