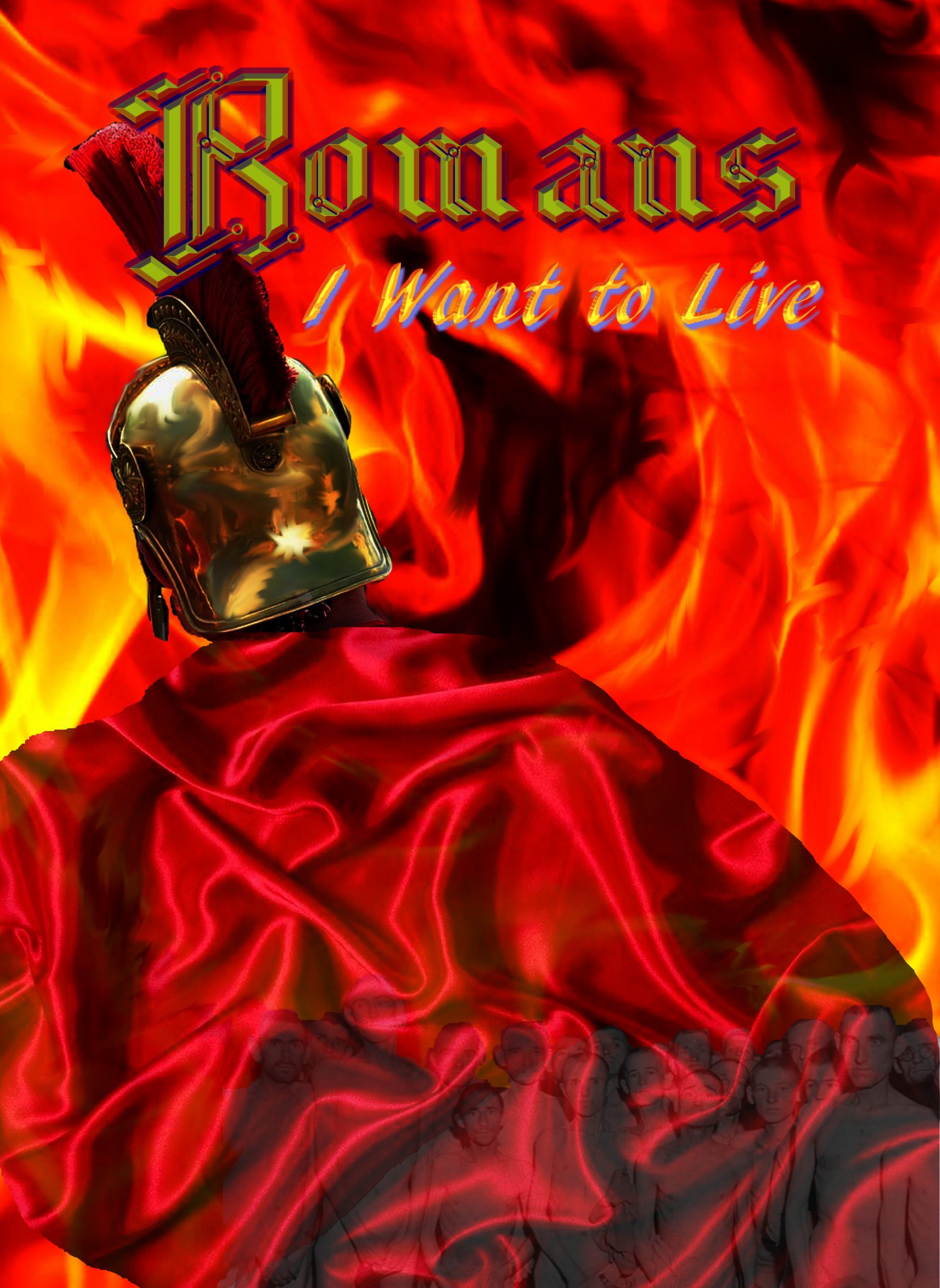 After Paul wrote a few chapters about the law, death, works, and a number of other subjects using symbols to explain the points he was trying to make, Paul seems to have shifted gears into presenting simple, easy explanations. Paul now made it easy to see Jesus’ obligation in the plan of salvation. Why the sudden shift? If we looked back a few chapters, we would see the answer.

Romans 2:17-20 RSVA But if you call yourself a Jew and rely upon the law and boast of your relation to God (18) and know his will and approve what is excellent, because you are instructed in the law, (19) and if you are sure that you are a guide to the blind, a light to those who are in darkness, (20) a corrector of the foolish, a teacher of children, having in the law the embodiment of knowledge and truth–

Romans 3:5 RSVA But if our wickedness serves to show the justice of God, what shall we say? That God is unjust to inflict wrath on us? (I speak in a human way.)

Romans 6:19 RSVA I am speaking in human terms, because of your natural limitations. For just as you once yielded your members to impurity and to greater and greater iniquity, so now yield your members to righteousness for sanctification.

Romans 7:1 RSVA Do you not know, brethren–for I am speaking to those who know the law–that the law is binding on a person only during his life?

As we can see, in chapter 2 Paul explained that he was writing to the Jews. In chapter 7, Paul explained that he was writing to those who knew the law. In other words, the Jews. Everything in those chapters and between those chapters indicated who Paul was writing to. Paul had to convince the Jews, knowing the law didn’t make them better than the Gentiles, and the law could do nothing to save them. Then Paul had to get to the main point. Paul had to teach both the Jews and Gentile about the plan Jesus had to come to this world, fulfill the law, and offer Himself as the perfect sacrifice. That is the subject Paul is explaining in chapter 8.

When we look at the Letter of Romans, we can’t help but see the sequence Paul used to reach the Jews in Rome. Paul had to deal with a collection of religious people experimenting with a new religion. Of course they were religious people, otherwise they would not have been listening to Paul, going to meetings, and doing the things religious people do. We can look at people today and see the same situation. Certain people would not be caught dead in a church or any type of religious meeting. They avoid everything to do with religion, and live their own lives thinking they have all the answers to life they need. On the other hand, there are people who know God, and know there is so much to learn about Him. Those type of people tend to investigate different claims about God, and are convinced they know enough to judge between truth, a mixture of truth, and that small minority who use religion for personal gain.

Keep your mind on the situation of small groups of religious people. They could be small or large groups. Every small group seems to have at least one person who thinks they have all the answers, and they attempt to sway the thoughts and actions of everyone around themselves. They join a group out of curiosity, then try to mold in what they know. They may be trying to show off a bit, and they may be clinging onto what they have learned. They don’t want to think they wasted their time learning the aspects of God they thought were correct, and helped build the relationship level they were able to achieve. In some ways, they help to advance whatever group they join, and at times, hold back the group they are in.

Paul had to face such a group on steroids. Many of the Jews spent their entire lives learning about the laws, and trying their best to follow them. To some of those people, the law was their only connection to God, and they were not about to give up that relationship without a fight. Paul expected to see people making their own blend of salvation through Christ and the old Levitical laws. Any common thinking man could see that. Jesus had to deal with that situation with the disciples He hand picked. That was an object lesson we are still supposed to be learning from. Those motives are human nature and will continue to be a part of mankind up until Jesus returns. The disciples were stuck between those two worlds up until the time they saw Jesus come back from the grave, then spend forty days explaining what just happened, and showing them where every step in the process was recorded in scripture. All those miracles were never enough to help the disciples, or anyone else understand what just happened. But when Jesus showed them how the step by step process was recorded in scripture, that left the disciples speechless, and open to new suggestions. Who could argue with a man who just came back from the grave?

Jesus had to die in such a way, there was no doubt in the minds of anyone who witnessed the tragic event. A simple execution or accidental death would have not been enough. The disciples had to be placed in a position to help, at least speak out, maybe try to defend Jesus, but in reality, they had to choose between the world, and the one they claimed to love. People talk about the fear of God, and have no idea what it means, or what it actually feels like. But people do know what fear of the world is, and everyone has dwelt with that fear to one extent or the other. The disciples and all of Jesus’ followers dwelt with that fear during Jesus’ trial in front of Herod. It was easy to speak out in a crowd, but they all failed to stand up as a single man and face the consequences of defending God’s Son. It was a test of faith, and exposed the real fear that enslaved them.

People have a fear of loosing the connection they have with God. That is the fear most people refer to when they claim to have a fear of God. Of course a lot of people try to explain that fear as a form of respect. I’ve heard that definition a thousand times, but respect is only half the theme in neither the Hebrew nor Greek definition of fear.

Luke 1:50 RSVA And his mercy is on those who fear him from generation to generation.

To have that respect, there has to be a certain amount of fear that goes along with it. People can respect God, and also have a fear of moving away from the relationship they developed together. On the other side of that coin, there can also be a fear of moving closer to God. That is the issue Paul had to deal with before introducing the new concept of salvation through a fallen Savior, who God rose from the grave.

Paul had to first convince the Jews, there was a lot to learn about God, that the law was not the total view of God they were looking for, and the Spirit was trying to show them more about God. It seems rather strange to think, God wants to show people something, He wants to teach them, He wants to answer their questions, and fulfill their greatest desires, but that is left to each individual to choose. It is rather strange to think a God who created everything on this planet gave His ultimate creation the freedom to think and choose, and has left mankind that way since the day Adam was formed out of a pile of dust.

Since this world was created, mankind has been faced with decisions. Eve chose a promise from the devil over God’s command. Adam made that same choice. After that first sin, more choices were faced. Each choice either drew mankind closer to God, of further away. With each choice, the individual’s view of God has been altered, rearranged, and blurred to one degree or another. Each mind has an individual view of God they are convinced is correct. That view is all they know, and the individual tends to cling onto that view. As distorted as it may be, it is the only thing they have, and fight any attempt to change it. God knows how the human mind works, and how it reacts to each situation. When something easier is introduced, people jump at it, gobble it up, and the new concept becomes a part of themselves. When something new and greater is promised, people jump at it, thinking it will set them apart from others. That was the temptation Eve fell for. Eve was offered something she didn’t have. People still think and react in the same fashion. Promise any person something that will set them above others, and they will reach out and grab it with little or no thought. Paul was using a form of that concept to call people back to God.

Paul knew the Jews had to give up their coveted concept of the law to take another step closer to God. The law was all they knew and understood about God. It was their total concept of God. Asking a Jew to change was like asking them to give up their relationship with God. When someone has to give up something, there has to be something far better to replace it. Otherwise the person will feel empty inside, like something is missing. Many Christians do not understand that concept. Like the Jews, many Christians still use the law to tell people to give up this and that. But what are they offering to replace what has to be given up? People are stuck on the concept of exchange, and getting ahead in the transaction. Paul was asking the Jews to give up total reliance on the law. In exchange, Paul offered the greatest gift this world could ask for, the plan of salvation.

Before Jesus died and rose from that grave, there was no concept of a God who decided to send His Son to die for the sins of this world. A small minority saw a glimpse of God’s plan. But for the most part, sacrificial rituals were the way to deal with sin. By the time Jesus came to this world, that sacrificial system underwent a series of changes and modifications. Observing an endless list of laws, ritual cleansing, and personal purification was molded in with the sacrificial system to give a very dim view of God. Not too many people studied the scriptures. The common trend was to rely on scholars to read and interpret the laws, prophecy, lessons in scripture, advice God placed in scripture, and God’s unlimited insight into human nature. Scholars took the simple concept of God as a caring, loving Creator, and turned it into a concept similar to the religious factions left behind in Egypt, and widely practiced in surrounding nations. Scholars wanted God to join the world, when God was telling them to come out of the darkness this world offered. Introducing what appeared to be a completely new concept was not going to be an easy task for Paul or any of the other apostles. Each new group they met had their own challenges.