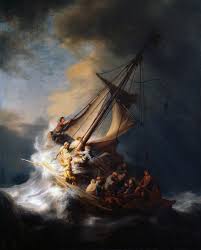 This story is from a collection of short stories in a book I released on the Gospel of Matthew. You can download that series of books and books on the other Gospels as well as an excellent collect of books on the Tabernacle, and Prophecies Jesus fulfilled. Each series of books has a unique style and are packed with lessons.

Matthew 8:23-27 MKJV And He entering into a ship, His disciples followed Him. (24) And behold, a great tempest arose in the sea, so much so that the boat was covered with the waves. But He was asleep. (25) And His disciples came to Him and awakened Him, saying, Lord, save us! We perish! (26) And He said to them, Why are you afraid, little-faiths? Then He arose and rebuked the winds and the sea; and there was a great calm. (27) But the men marveled, saying, What kind of man is this, that even the winds and the sea obey him!

James and John stood in the shallow water, one on each side of the small ship, holding it steady as first Jesus, then the other disciples entered in. James and John shoved the boat out into deeper water before leaping in. The ship drifted along on the calm glassy water as the two fishermen arranged the oars and began rowing. Looking up at the stars visible beyond the clouds Peter commented, “we could not ask for a more peaceful night.”

The disciples exchanged memories of the people they had just seen Jesus heal. They were all talking at once when Simone chimed in, “wait, wait, wait! The best one was the little girl with the old woman who coughed so much she couldn’t speak. I think the little girl was her voice. Like there was some type of spiritual connection between them.” Philip added, “I remember those two. I think you are right. Remember Jesus placed His hand on the child’s head, and the old woman stopped coughing.” Simone added, “yes, and remember the first words the old woman spoke? Thank you Melissa. That was touching. I think everyone expected her to thank Jesus.” Philip replied, “we don’t know how long the little girl stood by the old woman’s side. I may have been years.” As they talked Judas sat quietly dropping one coin at a time from the fingers of his right hand into the palm of his left, appreciating the chinking sound of each coin.

Sitting on the floor of the ship leaning back against the side, Andrew began to tell his favorite story. “The one I will never forget was the old farmer. He came to Jesus with one finger and a thumb on his right hand. I remember thinking, he must have become accustomed to his condition by now. He acted as if he had only come to observe, not to be healed. It was as if Jesus sought after him, reached out, took his hand, and made his hand whole. How did Jesus put fingers back on a hand that was missing them?”

Everything grew silent for a moment as small waves began to splash against the side of the ship. Thomas questioned, “I wonder how many of those people really needed healing, and how many came just to see if Jesus could cure everyday aches and pains?”

A low rumble of thunder was heard in the distance. John said to his brother, “we better pick up the pace, it sounds like a storm is rolling in.” James and John rowed at a quickened pace. Years of working together taught them how to work as a single unit in perfect rhythm. Peter looked back up into the sky, “the stars disappeared.” John assured him, “this is not the ocean, we will eventually hit land.” John had confidence in his ability, that of his brother, and the special connection they shared which allowed them to match each others pace, and keep the ship on course.

A flash of lightening lite the sky for a second showing the small ship was surrounded by nothing but water. The wind came rushing down the distant mountains like an army of battle horses charging the enemy for a quick and decisive victory. The disciples were first hit by the wind, followed by waves, and finally a torrent of rain which came down in buckets. John shouted out orders, “bail, keep low, row for your life!”

In a second the disciples were soaked by the rain, then the waves coming up over the sides of the ship. John and James put every muscle, every ounce of energy into their efforts to row against the wind and waves. They were determined to triumph against the elements. Large muscular arms toned and refined by years of manual labor were no match for the relentless storm. Aching backs and tired arms were soon over come by fatigue. Fear kept them battling on.

The weight of the water began to bring the ship lower and deeper into the water. Judas tied his purse to his belt, allowing him to use both hands and joined the others in a loosing battle against the elements of the wind, rain, and sea. 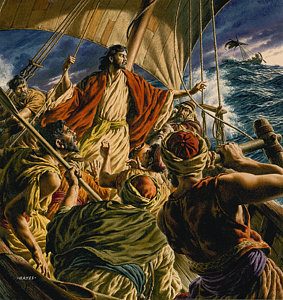 The rain was heavy, great flashes of lightening allowed them to see only a short distance into the darkness. Hopelessness began to set in as the wind and rain attacked them like screaming demons. Amid the physical turmoil they were facing the unseen Spirit of the Lord turned their minds to Jesus. As a single unit the disciples went to the back of the ship where they found Jesus sound asleep, wrapped in a wet blanket. Raising their voices in scattered pleas they said, “Lord, save us! We perish!” Jesus looked up at His frightened group of followers and questioned them, “why are you afraid? Where is your faith?” Amid the raging waves and roaring winds Jesus stood up. His stature was a stark contrast to the group of men now huddled below Him. With a determined look on His face, Jesus raised both His arms towards Heaven and rebuked the winds and the sea; and there was a great calm. The wind and rain stopped as suddenly as it had begun. The sea was once again calmed. Jesus looked down at the surprised faces looking up at Him, praying they all learned the lesson from the trial they had just faced. But the men marveled, saying, What kind of man is this, that even the winds and the sea obey him!

Jesus sat down in the back of the small ship and asked, “are we ready to continue on our journey?”

God’s Timeline God’s timing is best explained using what we view as a linear, or strait, one dimensional timeline. Of course God has a different view of time. He knows nothing but eternity and has the power to see future events, as well as having a perfect memory of the past. Since we do not…
END_OF_DOCUMENT_TOKEN_TO_BE_REPLACED

Divisions Are Drawn It doesn’t matter if you are left or right, conservative or liberal, religious or an atheist, deep down inside we all have the same feeling. Either we know or we have a suspicion, covid-19 is a man made virus and we are at the mercy behind the formulation, release, and maintenance of…
END_OF_DOCUMENT_TOKEN_TO_BE_REPLACED

We Are Seeing Genesis Unfold Today People tend to skip over Genesis, missing the details that explain what we see happening today. The Bible has a tendency of revealing details we went over a hundred times. Then one day we read those same stories and the details jump off the page explaining everything we happen…
END_OF_DOCUMENT_TOKEN_TO_BE_REPLACED

The Bottomless Pit When we compare the events recorded in Revelation we can’t help but notice how relevant announcements are. So far angels, thunder, lightening, earthquakes, trumpets, and other things have been used to announce events. We see this repeated throughout Revelation. In some chapters the symbol is introduced and defined. In other cases the…
END_OF_DOCUMENT_TOKEN_TO_BE_REPLACED

Welcome to Satan’s Playground If you’ve ever wondered what hell looks like, take a look at 2021. We have vaccines forced upon us. In 2020 the government talked about spending a few billion dollars. In 2021 the government spent $11 trillion in the first six months and ran out of money. If the government accomplished…
END_OF_DOCUMENT_TOKEN_TO_BE_REPLACED

God’s Throne in Revelation Rev Ch 4 When we turn the page and begin to read the story in Revelation chapter 4, we are tempted to begin interpreting the passages based on what we’ve been taught. In this case, we are going to look at a few details, and also look for key words that…
END_OF_DOCUMENT_TOKEN_TO_BE_REPLACED

Today’s Idols When we look at the Bible we normally get an image of a carved, wooden figure when we think of idol worship. Society has filled our minds with endless images of a person or group of people bowing down in front of a wooden, silver, or gold image of some fictitious god.…
END_OF_DOCUMENT_TOKEN_TO_BE_REPLACED